On Saturday, October 27th at 6:45 pm, Pinion Pine firefighters were dispatched to a commercial vehicle fire on Interstate 40 at the 64 mile marker westbound which brought the response of Rescue Squad 51, Engine 511 and Engine 521.


SQ 51 was the first arriving unit with a fully involved semi trailer and 1/4 vegetation fire. SQ 51 deployed an a wildland pre-connect and stopped the forward progress of the vegetation fire. E511 and E521 arrived on scene and deployed 1-3/4 CAFS pre-connects and obtained a quick knock down on the trailer, which was hauling plastic. Crew remained on scene and overhauled the trailer with the assistance of an ADOT front end loader. 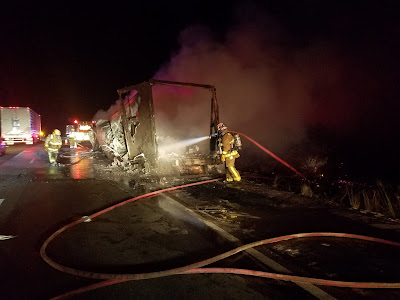 No civilian or firefighter injuries were reported and one lane of travel was closed for roughly three hours while firefighters worked. The cause of the fire was undetermined. 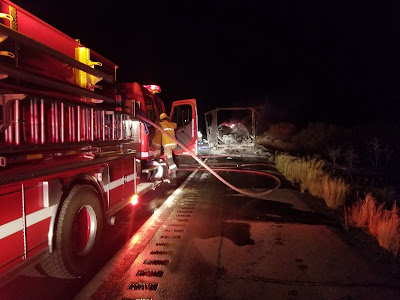