On December 23, 2015 at 10:26 PM, Pinion Pine Engine 523 and Rescue 525 were dispatched to a head on vehicle accident, pickup vs. semi on Highway 93 near mile marker 108 southbound. While responding, Engine 523 requested an air ambulance, Care Flight 14 out of Kingman airport was activated with a 20 minute ETA to the scene. Engine 523 arrived on the scene to find a semi on its side down an embankment and a pickup on the shoulder, on its roof with heavy damage. E523 crew began triaging three patients, two patients with minor injuries and a third victim still in the pickup who was deceased on arrival. E523 canceled Care Flight and Rescue 525 continued patient care. AMR transported both patients by ground to an area hospital in stable condition. 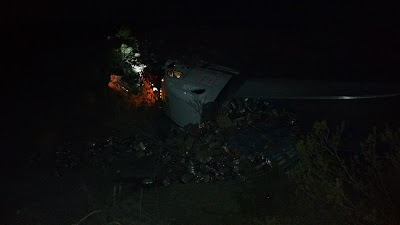 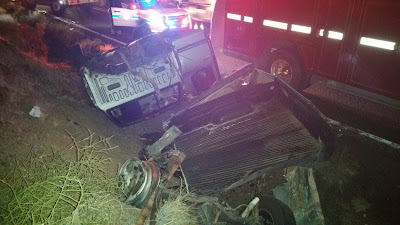 ﻿
According to the passenger of the pickup, the vehicle he was in left the northbound lanes of travel for an unknown reason and crossed into oncoming traffic where it collided with a tractor trailer. The impact was hard enough to shear the bed of the pick up off of the cab. The official cause of the accident is being investigated by the Department of Public Safety Highway Patrol. Traffic control was provided by Arizona Department of Transportation and lane restrictions were present for roughly 4 hours.