For the past 7 years, the Pinion Pine Fire District has teamed up with the Love's Travel Stop store #272 during the month of September to collect donations for the Children's Miracle Network in a "fill the boot" drive. All of the money donated goes to an area hospital, in our case Phoenix Children's Hospital. Store #272 has placed 1st in their district of 8 stores four of the last five years totaling roughly $40,000. This year, the goal has been set for $8,500.


Every weekend through the month of September, PNP firefighters will be at the Love's Travel Stop store #272 at Exit 59 on Interstate 40, from 10AM - 3PM, but the store itself is excepting donations 24/7. During the Labor day weekend, PNP firefighters collected $1,364 with a store total of $2,200. If you have the time, come meet the guys and help the kids at Phoenix Children's Hospital.

Both the Pinion Pine Fire District and Pine Lake Fire District have obtained new 4 gas air monitoring safety equipment. Each fire district has received one 4 gas monitor, and Pinion Pine also obtained a 5 gas monitor. This equipment was obtained from a grant via the "Firefighter Support Foundation" which is a non profit private organization. The grant which was for $4000.00, covered the cost of the air monitors themselves and the equipment needed to calibrate and maintain them. During the grant process, both fire districts worked together to apply as a regional application, so that both agencies would have like equipment in the event of mutual aid responses. As such, Kingman Fire is also in the process of obtaining a grant for like equipment and all three agencies worked together in performing an evaluation of the different air monitors which are on the market today.

Local fire equipment vendor LN Curtis has worked hard on getting the pricing of the equipment to meet the grant limits, and all the agencies will be using the Dräger Model XAM 2500, and XAM 5000 air monitors. This will allow for all three fire departments to have like equipment and be able to assist each other during emergencies or other service calls. This equipment is critical in ensuring that the air which the public or firefighters are operating in is safe and it does so by testing for the following gases or environments: oxygen, methane (explosive limits), carbon monoxide, hydrogen sulfide and hydrogen cyanide. In-service training from LN Curtis and Dräger has now been completed and these air monitors are now in service and on the fire apparatus today.

On April 24, 2016 at 2:41 pm, firefighters from Station 51 received an alarm for an ATV accident near mile marker 5 on Hualapai Mtn Rd. Brush 516 and Batt. 5 arrived on scene with MCSO to find a male walking around his ATV with visible injuries. The patient advised his wife was still approximately 1.5 miles up the trail near the peak with a possible back injury. Brush 516 EMT took patient care of the male, while Batt. 5 made his way to the second patient with Mohave County Search and Rescue. B516 Captain established Lazy Y U Command and DPS Ranger 42 was requested out of Flagstaff, Az for a potential short haul operation. MCSO Sam 45 arrived on scene and Unified Command was established for the incident. 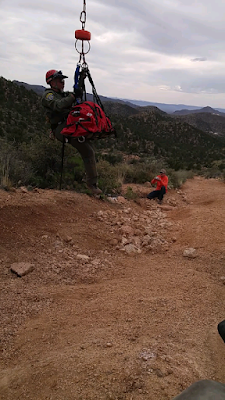 Batt. 5 made contact with the patient and confirmed short haul would be needed to remove the patient off the mountain. Batt. 5 provided patient care with AMR Paramedic and began packaging the patient for short haul out to Haluapai Mtn Rd. After a short flight, Ranger 42 had the patient on the ground on where she was transported by ground to Kingman Regional Medical Center in stable condition. The entire incident took roughly 3 hours and no other injuries were reported. 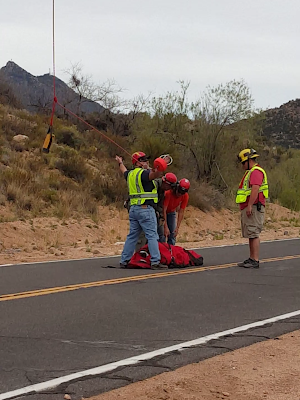 On April 23, 2016 at 6:24 pm, Pinion Pine firefighters were dispatched to the area north of Loves Truck Stop for reported smoke in the area. Engine 521 and Brush 516 responded from Fire Station 52 with smoke showing. Engine 521 arrived on scene on E. Early Circle to find an outbuilding on fire which had extended into a stack of hay bales with no immediate exposures threatened. Crews pulled an 1-3/4 attack line and had the fire under control in roughly 7 minutes. Firefighters spent the next hour and a half overhauling the roughly 30 hay bales and outbuilding. Upon our arrival, the home owners had just arrived home to find their shed and hay burning and began suppressing the fire. 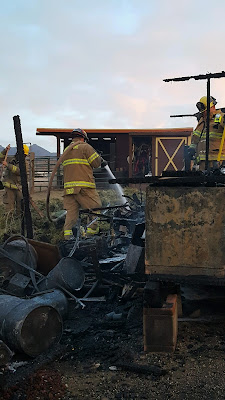 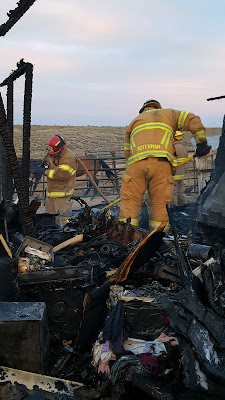 Although we do not advise homeowners to take action on their fires, we understand your valuables are at risk and we applaud the quick actions in preventing this fire from extending into the vegetation when winds were blowing roughly 20 miles per hour. The cause of the fire was undetermined and caused roughly $10,000 of damage.

Firefighters Return From the Topock Fire

On April 6th, 2016, multiple local, state and federal resources were dispatched to the Topock Fire, burning on the Havasu National Wildlife Refuge in mostly riparian fuels including salt cedar south of Topock, Az. The fire which started around 4 AM, quickly grew to 25 acres pushing the fire south from the New South Dike rd and jumped the Colorado River. Orders began to come in around 10 AM as the fire was threatening both Pirates Cove and the Topock Marina. E511 (PNP), A125 (GOV), E1102 (BUK), E3661 (CRD), E2 (GOL), B84 (MOV), Batt. 9 (FMM) and miscellaneous overhead were the first arriving units to a rapidly expanding fire.


E511, E1102 and E2 were assigned to structure protection at the Topock Marina under Battalion 9 where firefighters triaged the marina and adjacent mobile home park. Multiple helicopters and fire boats began suppressing the fire while engines held the South Dike Rd, working into the evening.


Around 9:30 PM, hand crews and engines began a firing operation when am unexpected wind shift occurred, aligning with fuels and the fire made a push towards the Topock Marina. E511 was placed placed at the marina and firefighters deployed a hose lay around the marina while E1102 began prepping the mobile home park and securing the utilities. Firefighters began a firing operation from a fire boat on the north side of the marina which was successful. E511 continued to work on the fire for the next 2 days, assisting hand crews with mopping up the fire perimeter along the New South Dike rd. On April 8th, the fire received much needed rain fall and E511 was released from the incident later that evening. The fire acreage recorded was 2,200 acres.