On April 22, 2013 at 12:05 PM, E526 and C501 were dispatched to the area of Old Highway 93 and Rock Chuck Rd for a large brushfire after receiving multiple reports of smoke in the area . Units arrived on scene to find a quarter acre fire near a home that was sparked due to a homeowner burning trash during red flag conditions and left the fire unattended when it was "thought to be out". The main fire was quickly knocked down but multiple spot fires began popping up roughly 100+ ft from the main fire. Due to the nearly ten spot fires that were beginning to torch, E521 was requested for water and manpower. The fire was held at half an acre and crews remained on scene for approximately 2 hours while the fire was contained and mopped up. The homeowner was educated on burning during red flag conditions and although out of the fire district, was strongly urged to notify the fire district in the future for information on current fire weather conditions before burning. We would like to remind the public that when one decides to burn outside, you:

On April 15, 2013 around 4:35 AM, E511 and C501 recieved an alarm for a report of a motor vehicle accident on Interstate 40 near the 79 mile marker (Silver Springs). Initial reports indicated two tractor trailers involved and on fire with unknown injuries. C501 arrived on scene to find a single tractor trailer fully involved in the westbound slow lane and approximately 1/4 acre brush involvement. C501 requested B526 and WT528 to the scene. E511 arrived and scene and deployed a 1-1/2 CAFS attack line and began suppression as well as check with the occupants for injuries. All individuals involved were uninjured and refused medical care. The semi was hauling plastic bags and air filters. Crews were on scene for 3 and a half hours with westbound traffic stopped for one hour, then restricted to the fast lane for the remainder of the incident. The cause of the fire is believed to have started from the vehicle accident and the truck and trailer were totaled. No emergency crew injuries were reported.

﻿Article By Lt. Ron Hood
Photos By Firefighter Neal Raines
Posted by Pinion Pine Fire District at 8:47 AM No comments:

On April 4, 2013 E521 and C501 were dispatched to Interstate 40 near mile marker 65 westbound for an officer involved rollover accident. Units arrived to find a single DPS Highway Patrol unit that had rolled approximately three times with heavy damage resting wheels down. The officer was already self extricated from the vehicle and was being assessed by AMR. The officer was transported by ground to an area hospital with minor injuries. The accident is under investigation by DPS but is believed to be caused by a drivers side rear tire failure. No other individuals were injured and traffic was not affected while crews were on scene. 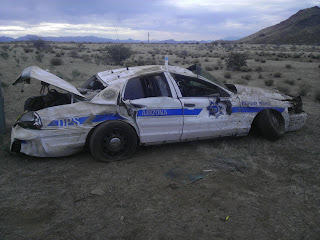