On May 18, 2012  the Pinion Pine Fire District responded to three seperate motor vehical accidents within 12 hours totaling 4 cars and involving 7 patients. The major accident came in to alarm at 1408 hours of a single truck that had rolled multiple times. While enroute, updated reports from alarm indicated a person may be entrapped within the car, which activated a second engine company, E526 with secondary extrication tools to support  E521 which was already in route. Chief 501 was first to arrive on scene and found two patients, both had been pulled from the truck by bystanders. Pinion Pine Fire District Paramedic started treatment and provided additional care during the transport of the two patients to KRMC. E526's crew provided man power and hazard mitigation of fuels from the accident.

Article by Lt/Medic Danny Zandvliet
Photos by Firefighter/EMT Chris Braudaway﻿
Posted by Pinion Pine Fire District at 10:19 AM No comments:

On May 13, 2012 at around 2 PM, Kingman Fire was dispatched to the area of Hualapai Mtn Rd/Mission Rd for a reported brush fire to the south. First units arrived on scene and found a 2-3 acre wind driven brush fire moving through grasses and brush. Minutes later additional Kingman engines were requested to respond to the incident and reports of homes threatened began to come in. At around 3:30 PM, the Slaughterhouse IC requested an additional type IV from Pinion Pine (E516), Northern Arizona Consolidated Fire District #1 (B336) and Golden Valley (A125) and later ordered a single engine air tanker from Prescott, Az. All units arrived on scene within 15 minutes and were placed in various places on the incident to watch firelines and structure protection. E516 was placed on the north side of the incident to watch the fire moving through a drainage and protect a house, had the fire gotten to it. E516 remained on scene for 2 hours and was released from the incident. Blm later took over the fire and its final acreage was 89 acres with no structures damaged. The cause of the fire is still undetermined and is a healthy reminder to always be careful especially during times of high temperatures, low relative humidy and high winds. Fire season has began throughout the state with 4 active large fires, accompanied by red flag warnings.

Posted by Pinion Pine Fire District at 2:58 PM No comments:

On May 7, 2012 at 1:15 PM an alarm was recieved for a motor vehicle rollover on Interstate 40 near mile marker 77 in the median. Chief 501 and E521 responded to the incident where the found a single vehicle pickup truck pulling a trailer that had rolled in the median. Two occupants inside the vehicle were evaluated on scene, one patient complaing of back pain and the second complaing of light headed and dizziness. Both patients were packaged and transported by ground to Kingman Regional in stable condition. The cause of the accident is under investigation by the Dept. of Public Safety. 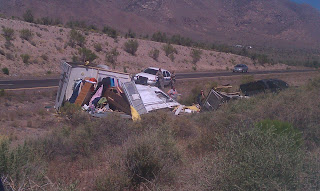 ﻿
Posted by Pinion Pine Fire District at 4:13 PM No comments:

On May 6, 2012 at 11:55 AM, an alarm was recieved for a brushfire 1/2 a mile north of milepost 4 on Hualapai Mtn Rd. E516 and C501 arrived on scene to find a 3.5 acre brush fire with a slow rate of spread and occasional single tree torching. Crews began cutting line and additional resources were requested. Kingman Fire Battalion 2, B246 and BLM  E3664 and E3665 were dispatched. At 3:31 PM the fire was transferred to BLM and all other units cleared the scene. The fire was held to 4.3 acres.

﻿
Bystanders on scene reported they were shooting firearms when one round sparked the fire, they tried to extinguish the fire with their water cooler but were unable to put it out. A 10-15 mph wind assisted in the growth of the fire in an area with scattered grass and brush. This incident is a reminder that the fuels in our area are dry and fire rapidly develops. Caution should be used when using firearms in an area that has fuels nearby, even bullets can start brushfire that can easily get out of control on windy days.

Posted by Pinion Pine Fire District at 3:31 PM No comments: