One Killed, One Airlifted After Highway 93 Accident

At 2:16 pm on October 31, 2013, Pinion Pine Firefighters were dispatched to Highway 93 near the 117 mile marker northbound for what was reported as a serious injury accident with extrication needed. This brought the response of E521, R525 and C501 from fire station 52. While in route, additional information was given that one person had been ejected from the vehicle and a second patient was trapped in the vehicle. Guardian Air and Careflight were both activated due to level of injury and a response distance of nearly 40 miles. Units arrived on scene, finding a single vehicle that was roughly 60 ft down a hillside and 200 ft from the roadway that appeared to have rolled end over end numerous times. The passenger of the vehicle was ejected and was unfortunately deceased upon arrival and the driver of the vehicle was thrown into the passenger seat with neck and back pain. Firefighters removed the roof of the vehicle while AMR and flight crews took patient care. The patient was then transported to Las Vegas via helicopter. 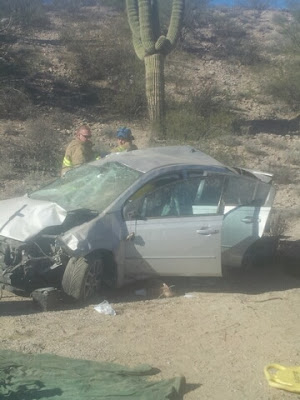 The accident caused some traffic delays while aircraft was landing and taking off, and no other injuries were reported. The cause of the accident is unknown and is being investigated by the Arizona Department of Public Safety Highway Patrol.