On July 24, 2011 at 10:41, PIP 111C and E1123 were dispatched to Interstate 40, mile post 80.2 eastbound initially for a passenger vehicle fire on the south side of the Interstate. Crews arrived on scene to find a 1/4 acre brushfire in light fuels with low rate of spread, with no vehicle involvement. Crews knocked the fire down quickly and held the fire at 1/4 of an acre. Units were on scene for approx 1 hour while mop up was completed. 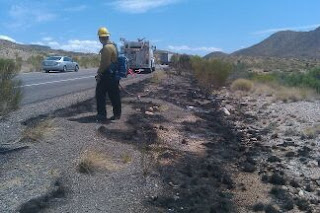 Posted by Firefighter Ron Hood at 10:47 PM No comments:

At 6:51, P.M on July 14th, PIP E1115 and Angel 2 were dispatched to the 76 mile marker on Interstate 40 for a single vehicle rollover with trauma. Crews arrived on scene and began patient care on the driver of the vehicle who was ejected at high speeds, unfortunatly the patient was deceased. No other vehicles/persons were involved. Crews remained on scene for clean up and stabilization for approx. 30 min.

Posted by Pinion Pine Fire District at 11:02 AM No comments:

On July 14th at 11:45 A.M, C203, E231, and E515 were dispatched to mile marker 57 on Interstate 40 for a reported vegitation fire. Crews arrived on scene and made a quick stop to the quarter acre brush fire. Crews were on scene for 30 minutes while the fire was mopped up.


Posted by Pinion Pine Fire District at 11:00 AM No comments:

Busy 4th For Firefighters, But Not With Fireworks

On July 4th at 1:22 PM, Pinion Pine Engine 1126 was dispatched for a motor vehicle accident on Interstate 40 at the 89 mile marker for a tractor trailer that overturned and left the roadway with possible extrication needed. Crews arrived on scene with AMR and began treating 1 patient, extrication was not needed. The patient was transported by ground to Kingman Regional Medical Center with life threatening injuries. Cause of the accident is unknown, and no other vehicles were involved. Westbound traffic was stopped for about an hour while the roadway was being cleaned up. 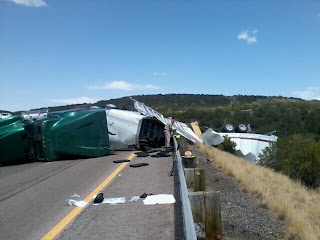 On July 5th at 2:35 AM, Pinion Pine Chief 111, Engine 1111, Water Tender 1128R were dispatched to mile marker 91 on interstate 40 for a vehicle collision sparking a fire involving two semi's, one of which was carrying a hazardous materials load of marine sanitizer. Crews arrived on scene to find one tractor trailer fully involved and the trailer of the hazardous load involved. The hazardous load was quickly knocked down and cooled while efforts were made on the second tractor trailer. Crews remained on scene for approximately 6 hours for further overhaul. One patient was transported by ground to Kingman Regional Medical Center with minor injuries. Westbound traffic was closed and diverted in Seligman, Az using alternate Route 66 for six hours. No other injuries or vehicles were involved. 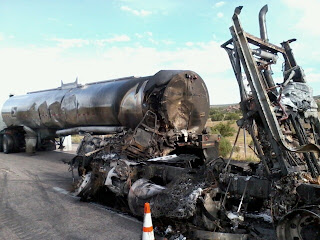 Posted by Firefighter Ron Hood at 11:07 AM No comments: