On April 26, 2014 around 7:30 am, firefighters received a call for a possible rollover accident on DW Ranch Rd near the 2 mile marker which brought the response of a structure engine, a brush engine and a Chief. B516 and C501 were first to arrive on scene to a SUV on its side blocking northbound DW Ranch Rd. Firefighters made contact with the driver who self extricated himself and stated he was uninjured. E521 continued to the scene to check for vehicle hazards and assist with traffic control on the slippery and blind corner. 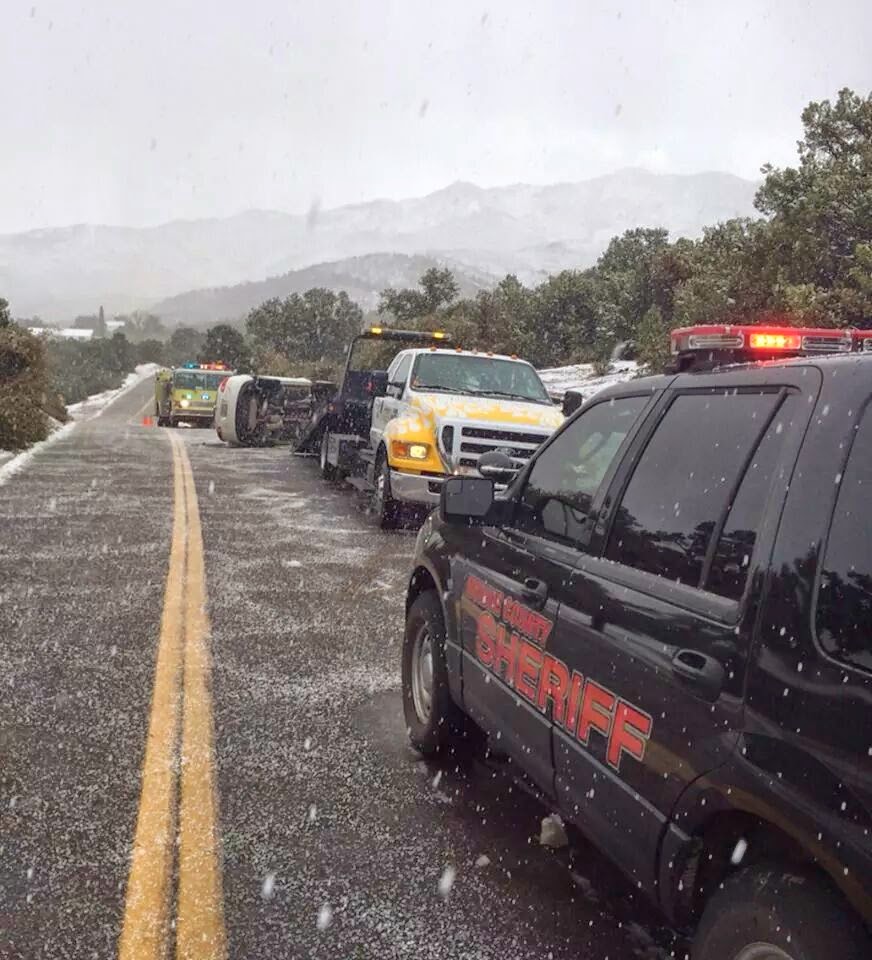 The cause of the accident was determined to be driver error, he stated while driving north on DW Ranch Rd, the roadway was covered with snow, when he approached the turn, the road appeared to continue straight which was actually a wash. Once he entered the wash he quickly realized the road went to the right, which caused him to over correct and begin sliding in the snow then striking an embankment, flipping his vehicle.

On Saturday, April 19, 2014 at 2:18 pm, Kingman Alarm dispatched Kingman E221, E211, R235 and Batt. 2 for a reported vehicle rollover on Interstate 40 near mile marker 58 westbound with occupants trapped. Once in route, Batt. 2 requested Pinion Pine E521 to respond due to the close proximity to district boundaries. E521 arrived on scene with E221 and Batt. 2 to find a single vehicle rollover blocking both lanes of westbound traffic. The driver of the vehicle was self extricated but the passenger was still inside the vehicle. Firefighters were able to gain access to the passenger without using extrication tools, and treat his injuries. 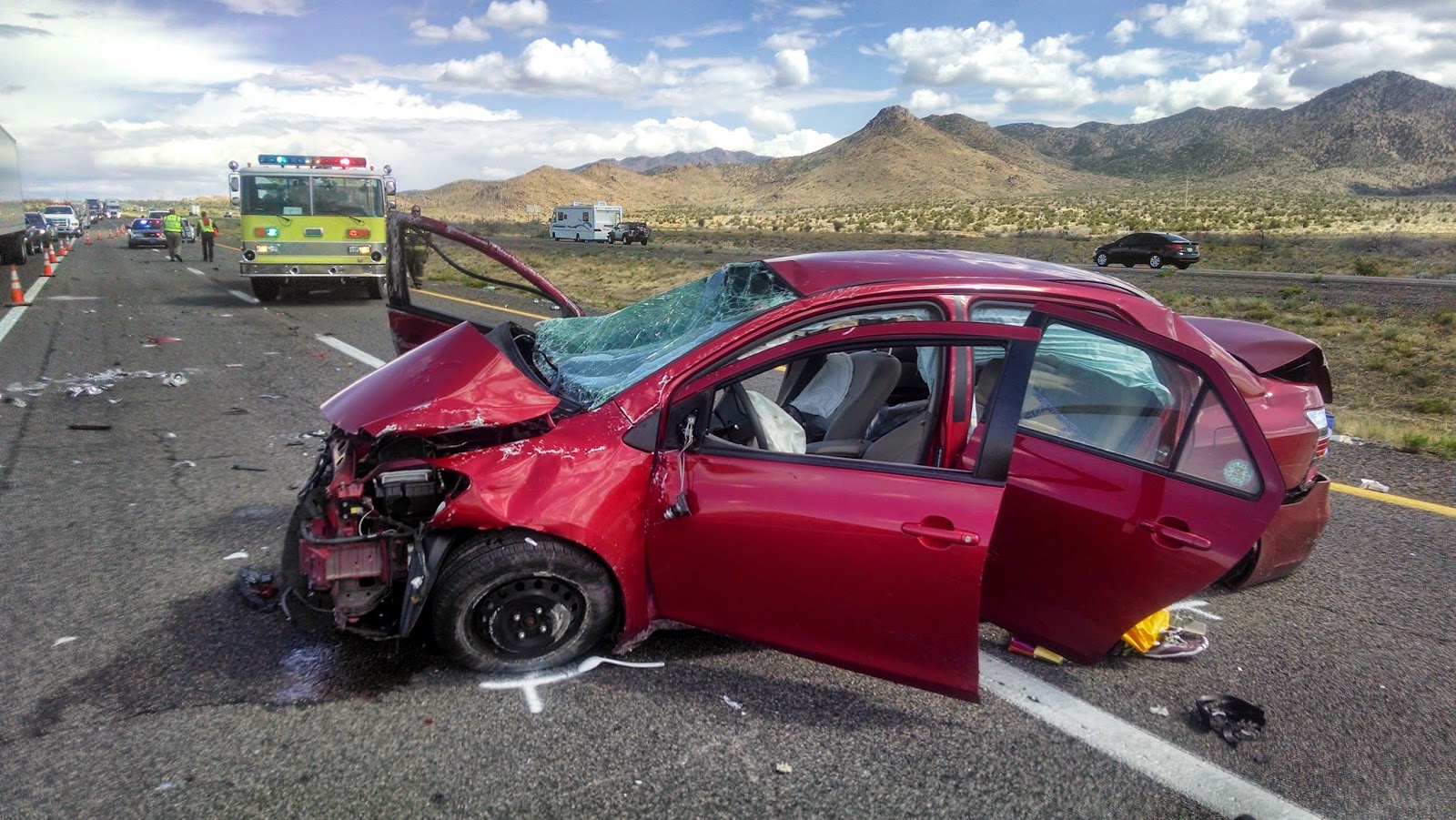 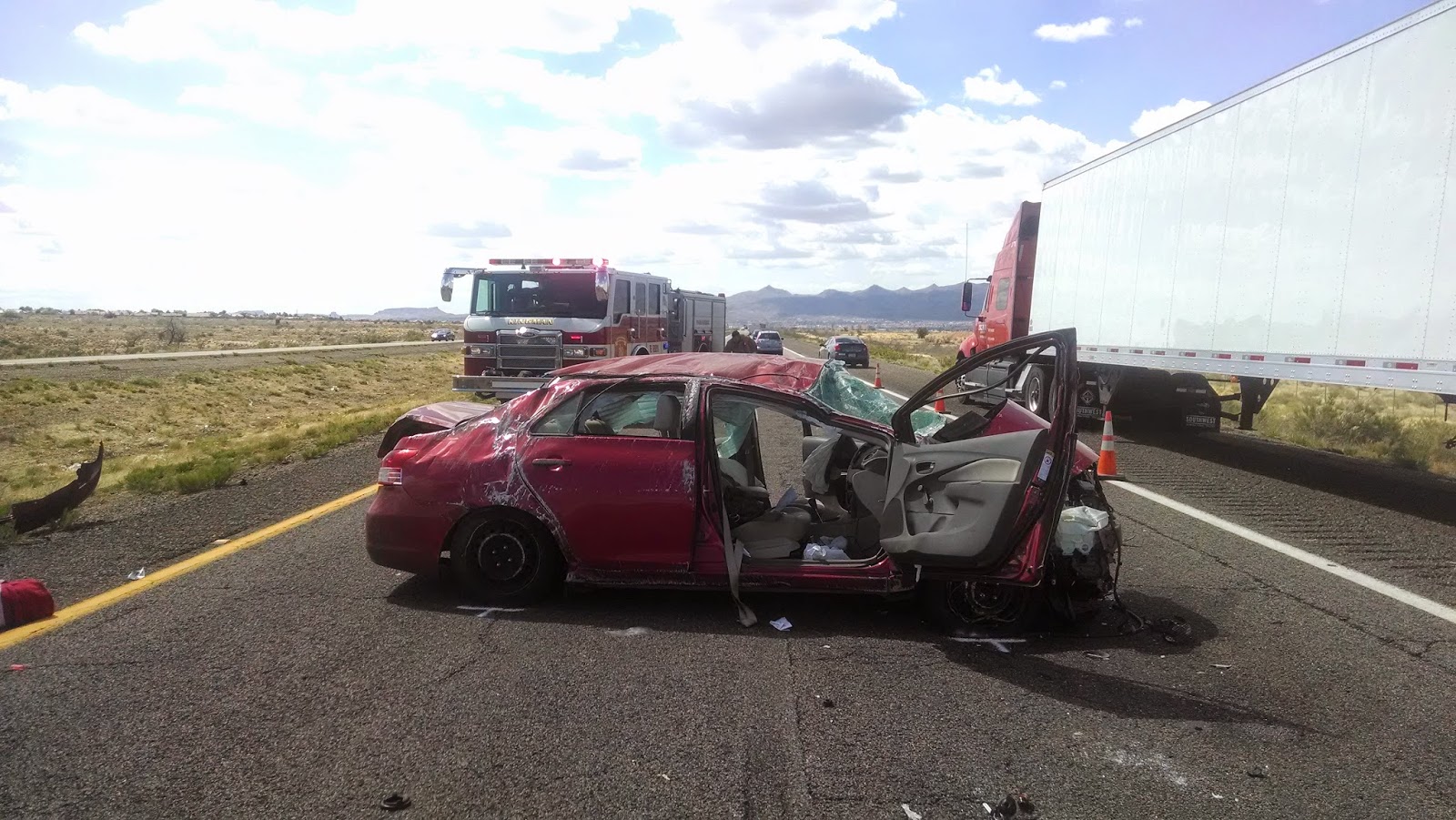 Both patients were transported by ground to KRMC in stable condition. The cause of the accident is being investigated by the Department of Public Safety Highway Patrol. Interstate 40 westbound was closed for roughly 15 minutes then reduced to the shoulder while fire personnel worked.

Its not everyday that firefighters have to use their extrication skills but the principles remain the same. On April 9, 2014 at 8:18 am, firefighters from Fire Station 51 and Fire Station 52 were dispatched to the area of Getz Ranch Rd and DW Ranch Rd for cattle stuck in a cattle guard. E521 arrived to find a bull with 3 legs trapped in the cattle guard and beginning to get tired. Crews assessed the situation and determined the best way to remove the bull would be to attempt to use extrication tools. Permission was granted from the ranch to do what was needed to the cattle guard to free the animal. 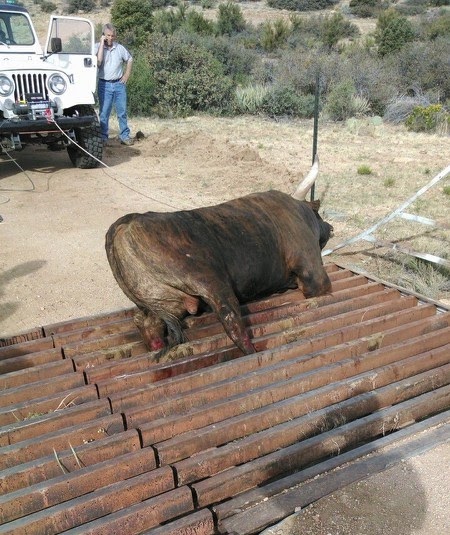 Firefighters from E521 and B516 deployed both cutters and spreaders, initially trying to simply spread the bars apart enough for the legs to free. It quickly became evident that that was not going to be enough, so crews used cutters and began cutting each end of the bars to widen the space. Firefighters had to work quickly to free all 3 legs rapidly so the animal would not try get up partially freed.


Crews were able to successfully remove enough material to allow the bull to step out of the cattle guard. Personnel stood back and waited for roughly 10 minutes for the bull to climb out. Upon observation, it appears the animal will be just fine, acquiring only scrapes and some sore muscles. 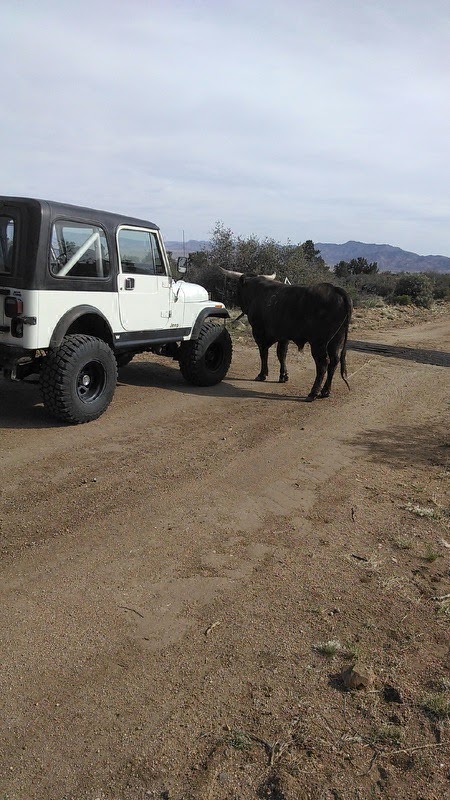 Posted by Pinion Pine Fire District at 11:37 AM No comments:

On April 8, 2014 around 1 pm, Kingman Alarm Center began receiving 911 calls regarding a brush fire on North Bank St approximately 1 mile north of Jaggerson Ave. First arriving units from Northern Arizona Consolidated Fire District #1 reported a fire roughly 4 acres spreading at a high rate of speed north through grass/brush mix. Crews began suppressing the fire on the northeast corner from Bank St. At around 1:35 pm, Command notified that progress was being made, the fire was now 8 acres and more type 6 engines were needed. Kingman B246, C201, FP3 and FP4, Golden Valley A135, BLM E3663 and Pinion Pine E513 and B516 were dispatched to the fire. 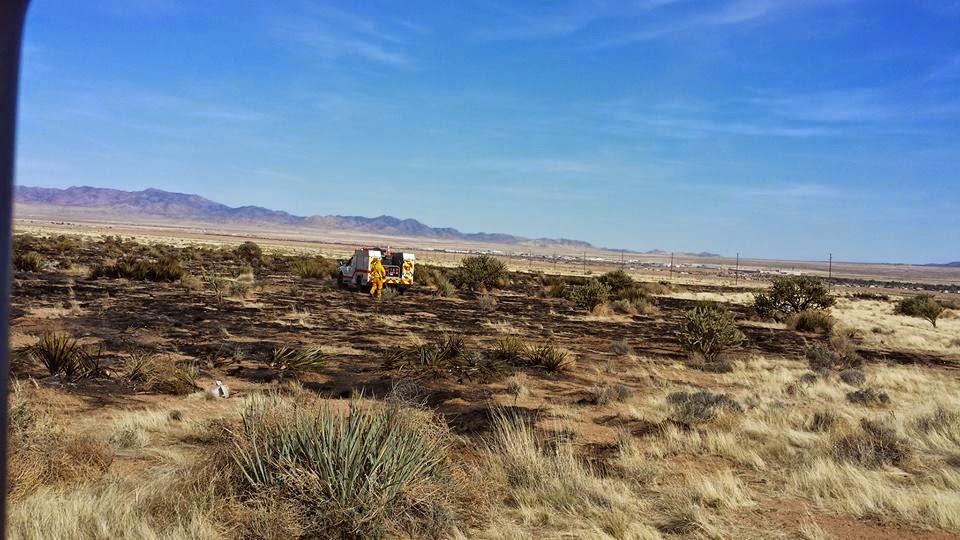 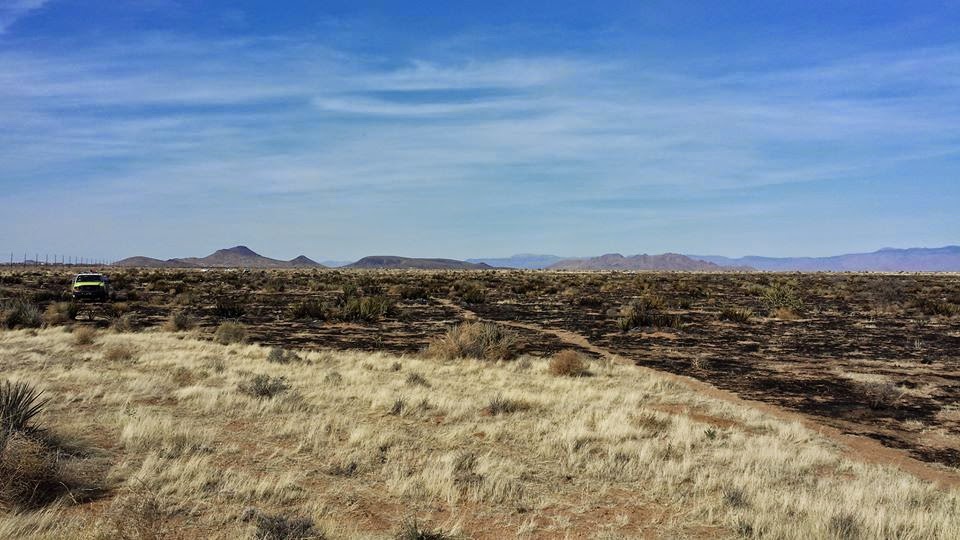 Fire crews were able to stop the fire on a 2 track road to the north and wrap the east side of the fire containing it. Firefighters spent the next 3 hours mopping up the fire that totaled 73 acres. The cause of the fire is unknown and under investigation. No injuries were reported during the incident.

On April 8, 2014 around 12:04 pm, E511, E521 and C501 were dispatched to Interstate 40 at the 62 mile marker eastbound for a reported RV on fire. Units arrived in roughly 10 minutes to find an RV fulling involved with a quarter acre brush fire. Crews deployed an 1-1/2 CAFS attack line an began suppression. Crews had the fire out in 22 minutes and continued overhauling both the vehicle and the brush. 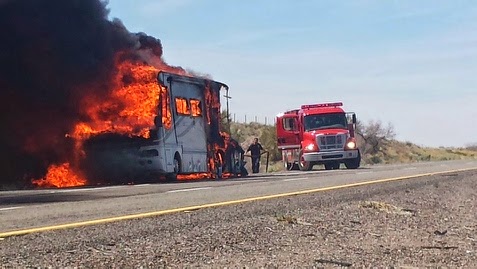 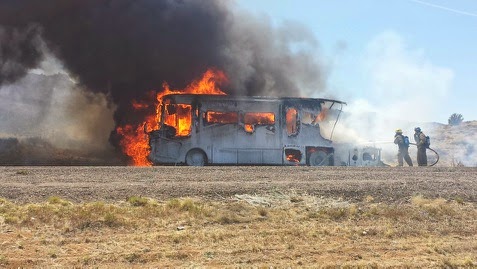 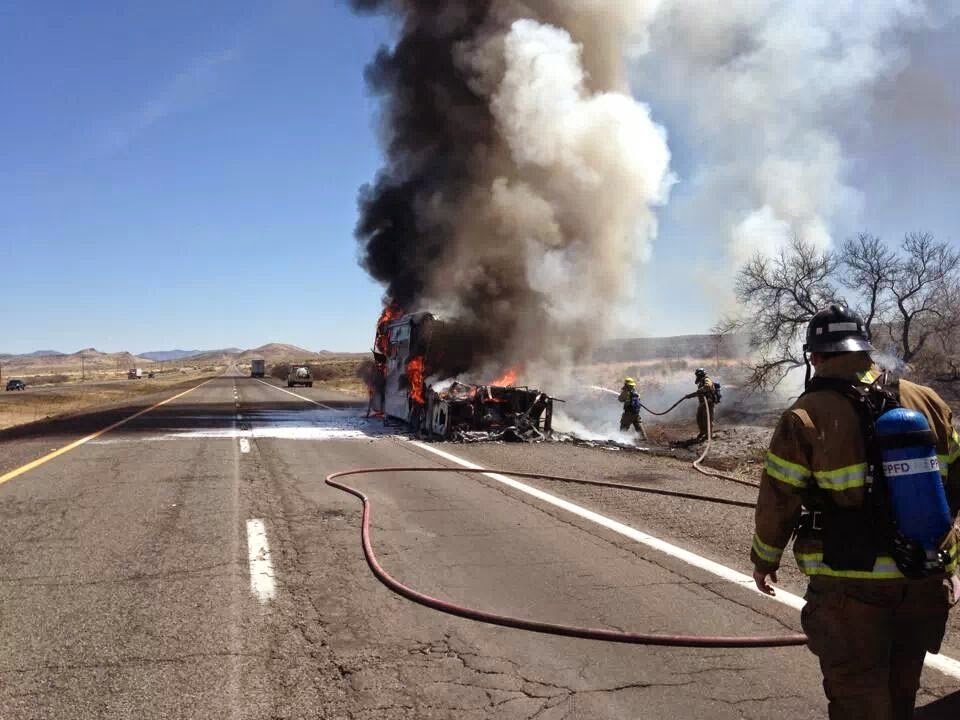 The cause of the fire is unknown but the occupants believe it started in the engine compartment. Eastbound traffic was initially stopped while firefighting operations took place and was quickly opened to 1 lane of travel. No injuries were reported.