Pinion Pine firefighters had a busy day June 29, 2013 beginning around 2 pm. At 1:57 pm, the first alarm in a series of 6 major incidents was received for a brush fire on Interstate 40 near mile marker 94 which brought the response of Brush 526 and Chief 501. While in route, Chief 501 spotted a second fire along Interstate 40 near the Willow Creek off ramp (Exit 87) and requested the response of Engine 523. Units arrived at both locations and suppressed the fires, holding them to a tenth of an acre.

Shortly after the units returned to quarters, at 5 pm, Chief 501 and Engine 523 were dispatched to the area of mile marker 71 on Interstate 40 for yet another brush fire. Crews were met by a homeowner who led them to the fire which was approximately 1 mile north of the Highway 93 junction. Crews arrived on scene to find a power pole that had been struck by lightning and sparked a quarter acre brush fire. Firefighters secured the scene and waited for the electric company to arrive and disconnect the power from the live pole.  Crews remained on scene for roughly one hour while mop up was completed. During this time, Engine 516 and Engine 526 received an alarm for a reported brush fire on Interstate 40 near D W Ranch Rd (exit 59) but were unable to locate a fire. 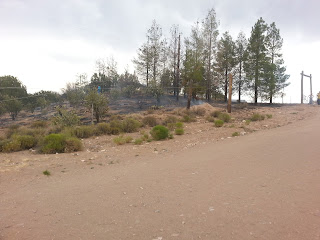 Crews wait for the arrival of the power company

While returning to quarters, Engine 523 received yet another alarm for a reported brush fire 4-5 miles south of Interstate 40 near mile marker 95. Once in the area, the crew noticed some smoke 10 miles south of the Interstate. Engine 523 made access at Jolly Rd (exit 102) and began working their way to the fire when further updates were received that a local rancher in the area was conducting a controlled burn. Engine 523 was canceled by State Fire and cleared the scene.

Once again, while Engine 523 was returning to quarters, E511, Chief 501 and Engine 523 received an alarm at 10 pm for a tractor trailer with smoke coming from the motor compartment and trailer brakes at the Loves Truck Stop near the fuel island. Chief 501 and Engine 511 arrived on scene to find that the vehicle had already been extinguished by store personnel. An attack line was pulled and the vehicle was further cooled off. Engine 511 crew used a thermal imaging camera to thoroughly check the vehicle for any additional heat. Units were on scene for 30 minutes and minimal damage was done to the tractor trailer.

Posted by Pinion Pine Fire District at 12:16 AM No comments:

On June 6, 2013 at 2:01 pm,  Pinion Pine firefighters were dispatched to Interstate 40 westbound at the 62 mile marker for multiple reports of a vehicle on fire. Initial reports came in to alarm of a vehicle smoking near mile marker 55 which brought the response of Kingman E221 and Batt. 2. As more reports came in, the incident was upgraded to mile marker 62 with the vehicle fully involved, E221 canceled while Batt. 2 continued. The updated information brought the response of Pinion Pine E511, E523 and C501. First units on scene found a fully involved passenger car on the shoulder that had sparked a vegetation fire in grass and brush with a rapid rate of spread which prompted the response of Kingman B246 and Pinion Pine E521 and B526R. 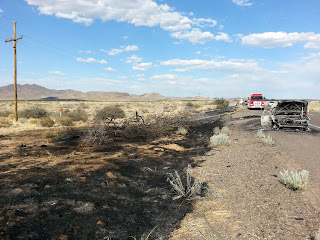 Fire crews were able to stop the forward progress of the brush fire near a culvert holding the fire at 1 acre . E511 deployed an 1 1/2 CAFS attack line and began suppressing the vehicle fire. Unfortunatly, the vehicle was a total loss. Crews remained on scene for approximately 2 hours while mop up operations were completed. Traffic was reduced to the fast lane of westbound traffic for roughly an hour and a half while fire crews actively worked on the shoulder. No injuries were reported and the cause of the vehicle fire was undetermined.

On the evening of June 5, 2013 around 8:15 pm, E511 and C501 were dispatched to the Petro Truck Center for a tractor trailer on fire in front of the fuel island. E511 arrived on scene to find the tractor portion of the semi fully involved. Fire personnel deployed an 1 3/4 CAFS attack line and began suppression.

Crews made a quick knockdown and the fire was stopped before extension was made into the trailer. Fire crews were on scene for approximately 1.5 hours. The Petro Truck Center was initially evacuated but was later reopened to the public. During the incident, traffic on Nellie Dr. was not altered and no injuries were reported. The cause of the fire is unknown, although the driver stated he had a drop in oil pressure just before the vehicle ignited. 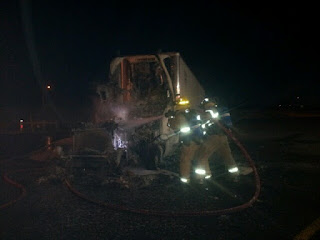 Photos by Captain Gail Jackson
Article by Lt. Ron Hood
Posted by Pinion Pine Fire District at 8:44 AM No comments:

At 1:30 on June 3, 2013, Pinion Pine firefighters received an alarm for a small brush fire on Interstate 40 near Blake Ranch Rd. Upon the arrival of E523 and C501, crews found a 1 acre fire in the median just east of Blake Ranch Rd in light grasses and brush being fueled by 15 MPH winds. Crews began cutting line and suppressing the fire when it jumped the westbound lanes of travel into the gore zone.

﻿
At this time B516 was dispatched and the Arizona Department of Public Safety Highway Patrol was notified for traffic control due to resources on both side of the Interstate and smoke blowing across the roadway. ADOT water tenders arrived on scene and also began suppressing the fire utilizing their spray bars and side discharges. E516 arrived and began cutting line around the northwest corner, preventing it from crossing the exit into an area with multiple structures.

Crews were on scene for approximately 4 hours and the westbound Blake Ranch Rd exit was closed for roughly 1 hour. The cause of the fire is unknown and no injuries were reported. A major factor in fire spread was due to high temperatures, high winds and low fuel moisture's in light flashy fuels and although resources were on scene in 10 minutes, this fire rapidly grew to 3.25 acres before forward progress was stopped.

On the morning of June 3, 2013 around 7:15 am, Pinion Pine firefighters responded to Interstate 40, mile marker 62.5 westbound for a vehicle accident involving a tractor trailer and a pickup truck. R525 and C501 arrived on scene to find a pickup truck in the crossover with moderate front end damage and all occupants out of the vehicle.

The 2 occupants of the vehicle sustained minor injuries and were treated on scene and transported to an area hospital with minor injuries. The driver of the vehicle stated a tractor trailer abruptly cut in front of him to make a U-turn in the crossover section of the median, resulting in him striking the trailer of the vehicle. The collision reduced westbound traffic to the slow lane for approximately 20 minutes while crews were on scene. The accident is being investigated by the Department of Public Safety Highway Patrol. The driver of the tractor trailer was uninjured in the collision.

﻿Photos by Captain Gail Jackson
Article by Lt. Ron Hood
Posted by Pinion Pine Fire District at 9:53 AM No comments: