On April 12, 2012 at 3:00 PM, E521, C501 and E526 were dispatched to Interstate 40, mile marker 59 eastbound for a motor vehicle accident with reports of one person trapped under the vehicle. Units arrived on scene to find a single pickup truck that had rolled ejecting both of its occupants onto the shoulder with one occupant halfway under the truck. The victim was removed from under the vehicle and patient care was conducted. Patient #1 was transported to Kingman Regional by ground with life threatening injuries. Crews continued care on patient #2 while Guardian Air landed. The second patient was transported to Las Vegas by Angel 6 with life threatening injuries. The accident closed both lanes of eastbound traffic and was rerouted through exit 59. The accident is under investigation by the Dept. of Public Safety.

On April 8, 2012 at 3:40 PM, E511 recieved an alarm for a semi on fire on Interstate 40, near mile post 69 eastbound. Upon the units arrival, they found a tractor trailer on the shoulder with its trailer wheels on fire. E511 crew deployed a CAFS attack line and began suppression on the trailer which was hauling gypsum and the brush involved which was held to .10 of an acre. Later during the incident, E511 requested T528 for additional water to cool the load. Crews were on scene for approx. 2 hours and traffic was reduced to one lane of traffic for two hours.

On April 1, 2012 at 10:30 AM E511 and C501 were dispatched to Highway 93, mile marker 116 for a reported RV on fire. Chief 501 arrived on scene and updated that the fire had spread to a secondary semi trailer and the brush. E511 arrived on scene and began fire attack on all components of the fire. The RV and trailer were both in the decay stage and were out within 15 minutes. The brush fire was stopped at 1/10 of an acre. Crews were on scene for approx. 2 hours and traffic was slowed but unaffected by the incident.

On March 31, 2012 at 9:40 PM, Engine 516 and Chief 501 were dispatched to Interstate 40, mile marker 63 for a reported vehicle rollover. Units arrived on scene to find a single vehicle SUV that had rolled on the eastbound shoulder with one patient self extricated from the vehicle. Crew, assessed and packaged the patient for transport to the hospital. Patient was transported to an area hospital with non life threatening injuries. The cause of the accident is not known but may have resulted from a failure of the front wheel. Traffic was unaffected by the incident. 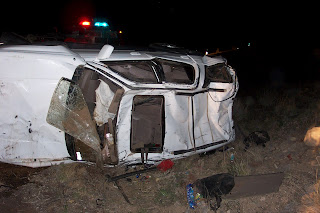 Crews Respond to Motorcycle Down

On March 30, 2012, at 11:15 AM, Engine 526 was dispatched to Highway 93, mile marker 110 for a reported motor vehicle accident involving a motorcycle. Unit arrived on scene and found 1 patient laying on the ground with severe road rash and lacerations. Crew assessed the patient and bandaged the wounds. patient was packaged and flown to Las Vegas by Careflight. Traffic on Highway 93 was stopped for approx. 1 and a half hours.