On March 28, 2013 at 11:43 AM E521 and Batt. 5 (Hood) were dispatched to Highway 93 near Wikieup, Az (MM 132) for a reported aircraft down. Units arrived at a staging area north of the incident with Mohave County Sheriffs Office Search and Rescue, AMR, DPS and Bagdad Fire while DPS Ranger and Angel 7 searched for the downed aircraft from the air. Angel 7 located the wreck and the staged resources responded to the scene which was located near Burro Creek Crossing Rd. Batt. 5 arrived on scene and reported a single engine aircraft approximately 500 ft down the hillside. Crews hiked to the aircraft, finding three occupants, one deceased and two in serious condition. Crews stabilized the aircraft and packaged the occupants for transport to the hospital. Both patients were carried back to the roadway and airlifted to area hosptials in. The cause of the accident is unknown and is under investigation. 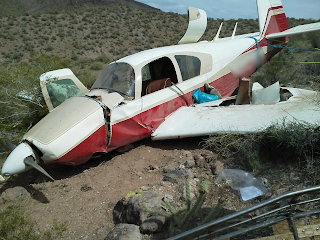 On March 18, 2013 at 8:15 PM, E521 was requested by the Arizona Department of Public Safety to MM 93.5 on Interstate 40 to extrictate two deceased occupants of a single vehicle rollover. E521 crew arrived finding a single pickup truck resting on its roof in the median with heavy damage. Crews extrictated both restrained occupants through the drivers side of the vehicle which was removed using "Jaws of Life" spreaders. Crews were on scene for roughly one hour with no lane closures or delays. The cause of the accident is being investigated by the Arizona Department of Public Safety.


Article by Lt. Ron Hood﻿
Posted by Pinion Pine Fire District at 1:15 AM No comments:

On March 18, 2013 at 4:15 PM, Pinion Pine firefighters were dispatched to Interstate 40 eastbound at the Blake Ranch exit for a reported large brushfire. Chief 501, E521 and E523 arrived finding approximately 3 acres burned with a structure threatened to the south. Crews deployed hoselines and made a quick knockdown on the fire that was being pushed with 10-15 MPH winds. Crews remained on scene for 3 hours while mop up was completed. No injuries were reported and traffic was minimaly affected by smoke during the first munites of the fire. All lanes of traffic remained open. 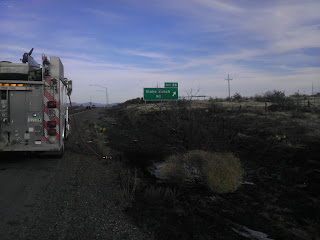 Photo and Article by Lt. Ron Hood﻿
Posted by Pinion Pine Fire District at 1:04 AM No comments:

Pinion Pine firefighters were dispatched to US Hwy 93 at the 106 mile marker Friday afternoon for a tractor trailer fire. The fire brought the response of E511 from Station 51, WT528 from Station 52 and the Duty Officer (Hood). Information was given in route that the semi trailer was detached from the tractor and fully involved with a load of tar paper. Units arrived on scene and deployed a 1 3/4 CAFS attack line and began suppression. Crews were on scene for approximately 3 hours while the load was overhauled. Traffic delays were minimal with a brief closure of southbound traffic by ADOT and AZDPS until the fire was knocked down and smoke was no longer impacting any drivers visibility. No civilian or firefighter injuries were reported.

Article by Lt. Ron Hood
Photo by Firefighter Matt Young
Posted by Pinion Pine Fire District at 8:59 AM No comments: