Not Your Average Vehicle Accident

On June 18, 2015 at 00:45 am, E523 was dispatched to mile marker 83 westbound on Interstate 40 for an unknown injury rollover accident. While responding, additional information was received that DPS was on scene, unsure if occupants were trapped at which time AMR launched a helicopter. E523 and AMR arrived on scene together and began assessing the situation. Crews had a SUV on its roof on the shoulder with extremely heavy damage to the roof. 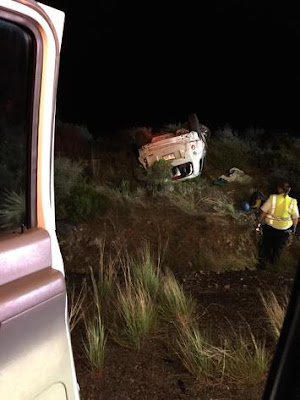 Upon looking inside the vehicle, no patient was located but a large crinkle was present in the center of the roof, leading to a high suspicion that a patient was trapped under the vehicle. Rescue tools were deployed and the vehicle was raised on both sides, again with no patient contact. The effort was now placed on searching a deep ravine to the north with heavy brush in it, considering the probability of ejected occupants. Careflight 14 was utilized with their night vision and on board spotlight to scan the steep ravine for any signs of a patient. After roughly 20 minutes of searching, DPS received information that an RV hauling the SUV on a car dolly was at Blake Ranch Rd (Exit 66) on Interstate 40, reporting their vehicle became disconnected. At this time, on scene personnel learned no occupants were in the vehicle at all during the accident so all resources cleared the scene and returned to quarters. 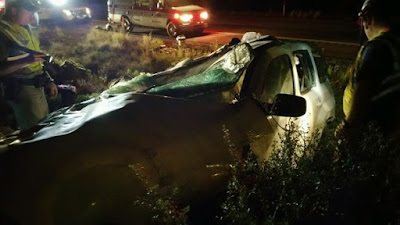 Fire and EMS personnel were on scene for roughly 1 hour and no other injuries were reported. Interstate 40 remained open during the incident, ADOT provided traffic control on scene.