Erin Taylor
Miner Staff Reporter
"Firefighters are finding that they're needing new tools to keep up with the safety standards of today's newer car models.

The 4,000 pounds of steel and metal that make up the average sedan are molded into crumple zones to protect drivers in crashes of speeds of around 40 miles an hour. But with manufacturers using stronger materials, responders are finding it harder to cut through the mangled metals when trying to free trapped occupants from a crash.

The Pinion Pines Fire Department is responsible for more than 80 miles of highway, from Interstate 40 at milepost 58 to the western county line and U.S. 93 to Wikieup. The department responds to anywhere from two to five accidents a week, said training officer Danny Zandvliet.

The department was recently awarded a $10,800 grant from State Farm Insurance to update its rescue tools, commonly referred to as the Jaws of Life. Zandvliet said many of the department's tools are 15 years old.

"Fifteen-year-old tools can cut 15-year-old cars, but they can't cut today's," he said.

Today's cars are engineered with materials that can withstand an average of 200,000 pounds of force. Many of the department's tools currently max out at around 70,000 pounds, Zandvliet explained.

The Jaws of Life refer to two separate tools; A cutter, that can cut through metal, and a spreader, which, as it name also infers, can spread car doors that have been jammed shut or other pieces of a mangled car. The tools are gas powered but are also available in electric versions.

When a patient needs to be extricated from a car, rescuers will first disconnect the car's battery. This prevents, among other things, the air bag from deploying if it was triggered in the crash but didn't actually go off.

Firefighters next break out the windshield and other windows to minimize flying glass during rescue efforts. They also flatten the tires and "crib," or stabilize, the wheels so they don't move. Then they'll get to work removing the patient. Zandvliet said around 30 percent of people who need to be rescued from inside cars actually only have minor injuries; They just can't get out of the twisted wreckage, he said.

The new tools purchased with the grant will be of great assistance in tackling the stronger metals used to make newer cars, he added. Earlier this month, the department responded to an accident involving a BMW in which the driver ultimately had to be removed through the back because rescuers couldn't get to him another way. Response times are also of the essence. When responding to calls of U.S. 93, the nearest alternate responding agency is 25 minutes away, he said.

Vendors from several different manufacturers visited the department before Christmas for the firefighters to test out the new tools. The department is looking to spend around $25,000 in total with purchases made by January."

Original Article Here >>>
Posted by Pinion Pine Fire District at 12:02 AM No comments:

On December 30, 2011 at 12:03 PM, an alarm was received for a motor vehicle rollover on Hualapai Mtn Rd near mile marker 7. E516 arrived on scene to find a single vehicle that had left the roadway and rolled down a 50 foot embankment onto a lower ledge, landing upright. The vehicle was occupied by five patients, all stating they were not injured. E523 and Chief 501 arrived on scene and began care on the remainder of the occupants. All of the patients were assessed and received medical care for minor injuries on scene but refused transportation to the hospital. All of the occupants claimed their seatbelts were on during the incident. 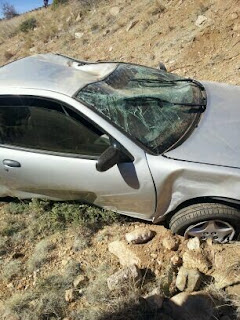 Units Respond To Fatality On Highway 93

On December 29, 2011 at 4:28 Pm, an alarm was received for a motor vehicle rollover on Highway 93 near the 104 mile marker in the median. While in route, E523 recieved multiple updates stating there were 3 occupants trapped inside the vehicle and 1 occupant trapped underneath the vehicle. Angel 2, Careflight 14 and DPS Kingman Ranger were activated to respond to the incident.

Upon arrival of E523, crews found 1 deceased patient inside the vehicle and all other occupants self extricated. Crew began care on the 3 occupants and packaged them for transport, 2 patients flown in critical condition, 1 patient transported by ground in stable condition. After patient care was transfered, crew began the extrication of the deceased patient in the vehicle. The extrication took approximately 20 minutes, the roof was removed to gain better access to the occupant.

The vehicle was traveling southbound on Highway 93 when it left the roadway for an unknown reason and rolled approximately 100 yards through the median. Crews were on scene for 3 hours, the left lanes northbound/southbound were closed during the incident.

Smoke Detector Proves Its Worth

The motto often used for smoke detectors is "A sound you can live with" and this may have been just the case. On December 18, 2011 at 2:12 AM, an alarm was recieved for a residential fire alarm activation at a McLane Way residence. Upon the arrival of Engine 511, no smoke was visible but the residents were outside of the structure. Crews made entry into the smoke filled structure and located the origin of the fire. A pile of rags that had cleaning solution on them had spontaneously combusted on the dining room table and began filling the house with toxic smoke. The items were removed from the residence while crews began ventilation of the structure. The occupants were assessed at the scene and released with no injuries.

When talking to the homeowners they stated "That's worth the $20 dollars a month" referring to the cost of the alarm system which is monitored by Southwest Alarm Services. "We didn't smell the smoke, the fire alarm is what woke us up and the smoke was just so thick, it burned our eyes" He said.

Crews remained on scene for approximately 3 hours until the home was safe to re-enter. No other damages or injuries were sustained from the incident. This incident is a reminder to check your smoke detectors/carbon monoxide detectors and make sure they are in working condition, they might just make the difference.

Evening Accident With A Twist

On Thursday, December 15, 2011 at 1:50 PM, Engine 523 was dispatched to Interstate 40 near mile marker 90 for a motor vehicle accident. Engine 523 arrived on scene and began care on the single occupant who had a head laceration. The patient was transported by ground to an area hospital with non life threatening injuries.

Upon assessing the vehicle, the crew was met by the occupants of the property, some very large Boar's, who seemed to be securing the vehicle themselves. It was later found out that they were pets on the property along with some goats. None of the animals were injured during the accident.

Article and Photos Submitted By Firefighter Ron Hood
Posted by Pinion Pine Fire District at 9:21 AM No comments: