On July 29th, 2015 at 11:58 AM, Pinion Pine firefighters were dispatched to the area of S Rease Rd cross of Hidden Valley Rd for a person trapped inside a trash truck. E523 arrived on scene roughly 20 minutes later to find a trash truck on the shoulder outside of a residence. Firefighters made contact with the patient who was laying down above the compactor unit of the trash truck with a dislocated right knee. 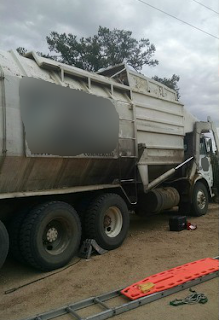 The patient stated the dumpster came off the lift into the compactor and was trying to correct the problem when he dislocated his knee and was unable to extricate himself from the compactor. It was immediately clear more man power would be needed so an additional unit was dispatched which brought the response of R525. Once AMR arrived on scene and provided the patient with much needed pain medication, the long task of getting the individual out of the truck began. Options were looked at and it was best determined to open the lift gate on the back of the vehicle and remove the patient on a back board over a fire ladder. 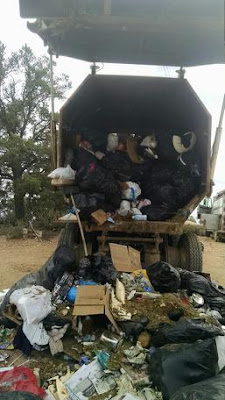 After roughly 15 minutes, the patient was safely on the ground at the rear of the vehicle where he was transported by ground to an area hospital with non life threatening injuries. The entire rescue took roughly 45 minutes to perform.