On May 27, 2015 around 4:10 PM, Kingman alarm began receiving 911 calls for a motor vehicle accident on Interstate 40 near mile marker 58 westbound. Initial reports indicated a head on type collision with a semi and U-haul truck which brought a mutli-agency rescue assignment consisting of two engines, two rescues and two chief officers. 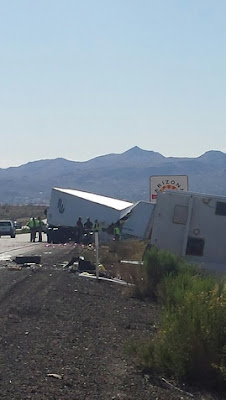 Pinion Pine Engine 523 was the first arriving unit and advised of a pickup truck on its side and a tractor trailer, both on the shoulder and blocking the slow lane with heavy damage. The balance arrived and crews began checking for injuries and mitigating a fuel leak. The occupant of the semi was uninjured and refused medical care while the driver of the pickup was treated on scene for minor injuries and transported by ground to Kingman Regional Medical Center. No other injuries were reported. 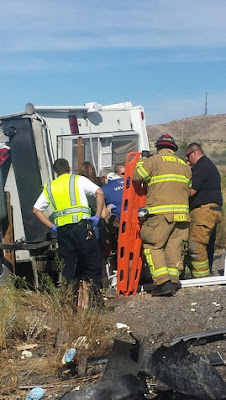 The accident is being investigated by the Department of Public Safety Highway Patrol, although the driver of the pickup stated for an unknown reason, his vehicle traveling eastbound left the roadway, traveled through the median and struck the side of the semi trailer, ripping the tandem set of wheels out from under the trailer. Resources during the incident included E221, R235, Battalion 2 and FP 4 from the City of Kingman, Pinion Pine resources included E523, R525 and C501. Arizona DPS and ADOT provided traffic control.

Article by Captain Ron Hood
Photos by Captain Gail Jackson
Posted by Pinion Pine Fire District at 9:49 AM No comments:

On May 20, 2015, around 8:48 AM, Pinion Pine firefighters were dispatched to mile marker 61 eastbound on Interstate 40 for a reported semi fire. This brought the response of one Engine and a Chief Officer. While in route, a large column was visible from Fire Station 52, at this time Battalion 5 requested a water tender from Kingman Fire Department. Once on scene, Battalion 5 advised of a semi on the shoulder roughly 50% involved with extension into the brush. A second Engine from Pinion Pine was dispatched while crews began fire operations as well as an engine from Kingman BLM. The fire was knocked down and a loader from the Arizona Department of Transportation overturned the vehicle to gain better access to the load on fire.

Crews remained on scene for roughly 2 hours to overhaul the fire, a Pinion Pine Rescue unit was dispatched for rehab and air support. During the incident, Interstate 40 was closed for roughly 45 minutes and reduced to the high speed lane for 3 hours once it was re-opened. The incident caused quiet the back up, extending over ten miles into the City of Kingman. The cause of the fire was undetermined, although the driver stated his refrigeration unit on the front of his trailer blew up and fire was everywhere. No injuries were reported during the incident. 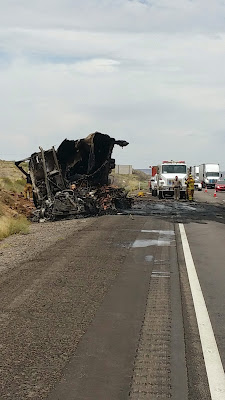 This fire represents how invaluable our mutual aid agreements are with the City of Kingman as well as the other neighboring fire jurisdictions and we would like to acknowledge them for their assistance. These agreements allow us to maximize our manpower and provide for better public and firefighter safety when needed without taxing one organizations resources to its limits.

On May 9, 2015 at 3:52 PM, Pinion Pine firefighters received an alarm for a motorcycle down near mile post 88 (Willow Creek) on Interstate 40 westbound. While responding, additional information was received that the patient had suffered some sort of leg trauma and that a bystander had placed a tourniquet on the patient. Careflight was notified and placed on standby at this time. Once the first arriving DPS officer arrived on scene and made patient contact, he determined the helicopter would be activated to the scene. Engine 523 and AMR arrived on scene, finding the rider lying in the slow lane. It was noticed the patient had received significant trauma to their left leg. That patient was placed in full C-Spine and assessment began. Careflight arrived on scene and flight crew began managing the injury while the patient was packaged for flight. 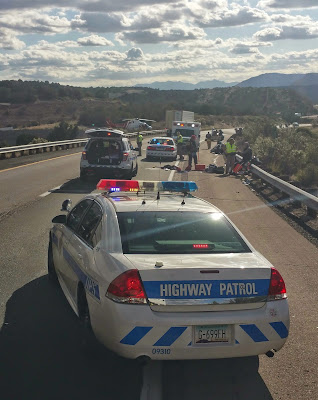 The patient was flown to Flagstaff, Az. The cause of the accident is unknown at this time and is being investigated by the Department of Public Safety Highway Patrol. The patient did say they struck the end cap of a guardrail with their lower leg and was ejected from the bike. Traffic was reduced to one lane for roughly 2 hours while crews worked and the scene was cleared. Interstate 40 was closed briefly twice while the helicopter landed and lifted off.