On November 28, 2013 at 3:50 pm, Pinion Pine Firefighters received an alarm for a reported motor vehicle rollover on Interstate 40 near mile post 90 in the median with extrication needed. E521 and C501 were dispatched from Fire Station 52 (fs52). Additional information was received that multiple patients may have been ejected which brought the response of Careflight and Guardian Air in addition to AMR and fire district resources.


Units arrived on scene to find a single passenger car on its side with moderate damage, that appeared to have rolled roughly 300 ft. Crews began checking for injuries and found three patients ejected and two in the vehicle needing extrication. The two adult patients ejected were unfortunately deceased upon arrival, the third patient was a young child that had been thrown roughly 75 ft and was in critical condition. 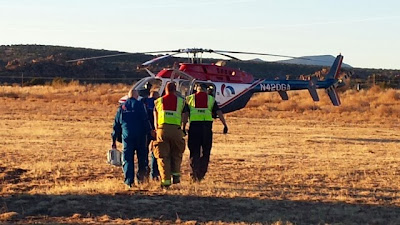 Firefighters extracted the two victims from within the vehicle, both of which had obtained serious injuries. The child and one occupant of the vehicle were airlifted to an area trauma center, while the third occupant was transported by ground to KRMC. The cause of the accident is unknown and being investigated by the Arizona Department of Public Safety Highway Patrol.

We want to remind everyone to please wear your seat belt and use extra caution during your holiday travels.