On October 14, 2015 around 9:20 pm, the Kingman Alarm Center began receiving multiple reports of a vehicle accident between mile markers 88 and 90 on Interstate 40 westbound which brought the response of Engine 513 and Chief 501. While in route, resources were advised per DPS, that extrication may be needed to remove one of the occupants from the vehicle. At this time, a care flight air ambulance was dispatched to the scene. 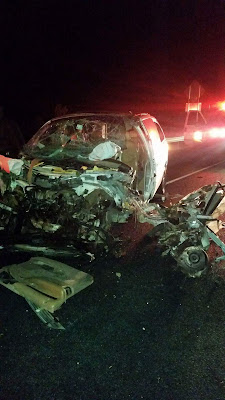 Engine 513 and Chief 501 arrived on scene to find a minivan on the shoulder with heavy damage to the front and front drivers side of the vehicle. Crews began patient care on two patients, one which was already out of the vehicle with lacerations to the arm and head. The second patient was in the vehicle, unconscious and unresponsive but was breathing adequately. Both patients were assessed, treated and transported to an area hospital by an AMR ground ambulance in stable condition with a fire department attendant. Extrication was not required to remove the patient from the vehicle.

For an unknown reason, the vehicle which was traveling westbound, struck the end cap of a median guardrail then traveled across both lanes of traffic and struck the guardrail on the shoulder. The cause of the accident is unknown and under investigation by the Arizona Department of Public Safety Highway Patrol. The Arizona Department of Transportation provided traffic control and the roadway was reduced to one lane of travel, with minor traffic delays initially.

Posted by Pinion Pine Fire District at 10:07 AM No comments: