On the evening of August 26th, 2013 around 9:15 pm, firefighters received an alarm for a commercial vehicle on fire near mile post 68 on Interstate 40.  This brought the response of Engine 511 and Battalion 5. Battalion 5 arrived on scene to find the trailer portion of the semi on fire above the tandem axles approximately 50 percent involved and appeared to be hauling coconuts. E511 arrived and stretched a CAFS attack line and made a quick knockdown on the fire.


Due to the load arrangement and extensive overhaul required, Rescue 525 was dispatched to support the operation. Once the rescue arrived, a K12 rescue saw was used to cut holes along side of the trailer to check for extension to the front of the trailer. Ultimately, ADOT used a front end loader to push the trailer over and the roof was removed. During overhaul, crews learned the product was not coconuts but cantaloupes.


The cause of the fire was unknown but is believed to of started from a brake fire. Crews were on scene for roughly 3 hours, traffic was reduced to the high speed lane during the operation. Interstate 40 was briefly closed during the initial suppression efforts for firefighter and public safety.

On August 25, 2013 at 10:24 pm, Pinion Pine firefighters received an alarm for a motor vehicle accident on Interstate 40 near the 88 mile marker westbound. B526 arrived on scene with to find a passenger car resting upright in the median with moderate damage. The vehicle left the roadway for unknown reason, causing it to rollover end over end. Two patients were self extricated from the vehicle with obvious injuries upon arrival.  It was found that the driver was ejected from the vehicle and the passenger received a laceration to the head. Both patients were transported to an area hospital by ground in stable condition. The Department of Public Safety Highway Patrol is investigating the accident. The incident did not cause any traffic restrictions. 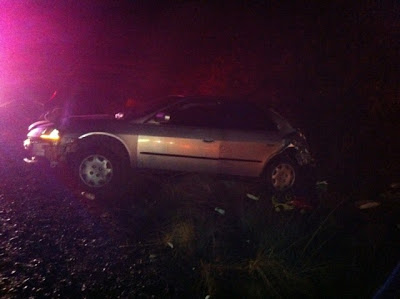 Fire Chief Joe Jackson and Captain Gail Jackson attended the 2013 Andy Award ceremony and annual dinner at the Powerhouse Visitors center in Kingman on Saturday, August 25, 2013. The Pinion Pine Fire District was nominated as a candidate for the annual Public Service Award given by the Kingman Area Chamber of Commerce. The Pinion Pine Fire District is thrilled to announce that we were presented with the award which was given for service above and beyond the call of duty, for our efforts during the Dean Peak Fire which threatened our community. We were also recognized for the special events we provide for the citizens of our community. 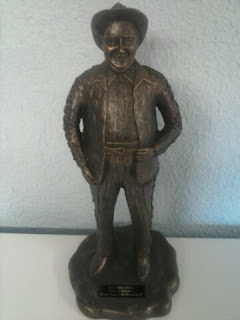 This was not the only thing received last night during the ceremony, The Ericksen family, a resident of the district presented a banner to the Chief, thanking Pinion Pine Fire and the Northern Arizona Incident Management Team for our efforts. The banner was signed by many people from the within our district as well as community members outside. The idea was given to Tom Ericksen, by ten year old daughter Annabelle Ericksen who said something had to be done for the firefighters. Well Annabelle, it was a fantastic idea and we are proudly displaying the banner inside fire station No. 52.


The Burak family also presented the firefighters with a banner which they brought to the fire station on August 18, 2013. The Burak family are also district residents and owners of the Hot Rod Cafe in Kingman. The Hot Rod Cafe donated sandwiches from their family restaurant to the firefighters battling the Dean Peak Fire in early July and their banner is also proudly being displayed inside Fire Station No. 52.

We would like to thank the Kingman Area Chamber of Commerce, the Burak family, the Ericksen family and most importantly the residents of our fire district and the community for all of the support YOU give us.

Posted by Pinion Pine Fire District at 1:34 PM No comments:

On August 20th, 2013, the Pinion Pine Fire District received a request through the State of Arizona for a type 3 engine to respond to California for "August Preposition". E523 filled the order and left for Mammoth Lakes, Ca where they were placed on the Inyo National Forest for severity/initial attack. Their job is to patrol an assigned area and be on the ready to respond locally to any new start that may occur.

On August 22nd, 2013, while patrolling on Owens River road, the crew of E523 spotted a fire near the top of a mountain roughly 1.5 miles off the road. The crew packed up and began hiking to the fire that was started by lightning along with the local Inyo National Forest engine and two engines from Minnesota. Once on scene, a line was cut around the fire and mopped up, containing it to 1/4 of an acre. The crew will continue to patrol until a new assignment is given.

Around 1:30 pm on August 22nd, 2013, Pinion Pine fire units were dispatched to the area of Blake Ranch road and Prospect road for a reported brush fire which brought the response of 1 engine and 1 chief. C501 located the fire, a single tree burning off of Prospect road which had been struck by lightning. A second report of a fire was received by Kingman Alarm in the area of Silver Dollar and Line drive, roughly a mile away. B526 was diverted to this incident, locating the single burning tree south of Line drive which was also struck by lightning. Upon C501 completing the first fire, a third report came in of a fire near Line drive and Reese road. C501 arrived in the area to find yet another single tree that had been struck by lightning and was burning. A local homeowner nearby had seen the fire and began putting it out. All three fires were contained to a tenth of an acre and no structures were threatened and/or damaged. 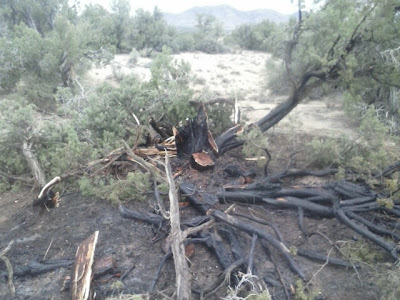 On August 22nd, 2013 at 11:50 am, Pinion Pine Fire received an alarm for a vehicle rollover on Interstate 40 near the Hwy 93 junction. C501 and B526 responded and found a vehicle resting on its side in the median, all occupants appeared to be self extricated. Two patients were transported by AMR to an area hospital with minor injuries. The cause of the accident is unknown and being investigated by the Department of Public Safety Highway Patrol. There were no traffic restrictions during the incident. 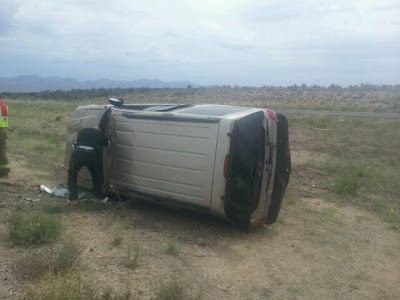 On August 20, 2013 at 19:14 pm, Firefighters received an alarm for a commercial vehicle fire on Interstate 40 eastbound near the 77 mile marker which brought the response on 2 engines and 1 chief officer totaling 7 personnel. Crews arrived on scene, E511 deployed a CAFS attack line and began suppression on the tractor and front of the trailer. Once knockdown was accomplished, E521 crew made access to the rear of the trailer and began extinguishing and overhauling the load which was canned fruit. Crews were on scene for roughly 3 hours, no civilian or firefighter injuries were obtained. Both lanes of eastbound traffic were shut down for 30 minutes and were then reduced to the high speed lane for the remainder of the incident. The cause of the fire is unknown, both tractor and trailer were a complete loss. 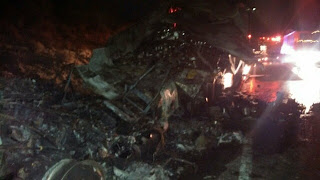 On August 18, 2013 at 12:19 pm, Pinion Pine firefighters were dispatched to mile marker 82 on Interstate 40 eastbound for a tractor trailer fire which brought the response on 2 engines and 1 chief officer. C501 arrived on scene reporting the tractor to be fully involved with possible extension into the trailer which had a load of newspaper. 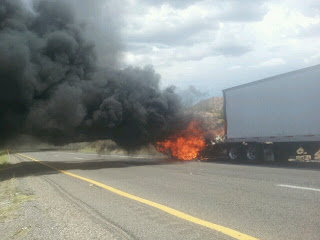 E511 and E521 arrived on scene, deploying a CAFS attack line and quickly knocked the fire down. E521 gained access to the trailer and made entry, checking for further extension into the load utilizing a thermal imaging camera, with no fire found. Crews were on scene for roughly 2 hours while overhaul was completed. Initially, eastbound traffic was completely stopped for about 30 minutes until the fire was under control, then being reduced the the high speed lane. The cause of the fire is unknown but the driver of the vehicle believes the turbo went out causing the fire to start in the motor compartment.

Posted by Pinion Pine Fire District at 10:11 PM No comments:

Residents in Kingman had an amazing light show last night, August 17th, 2013 when monsoon weather moved in around 3 pm and stuck around until midnight. Beau Jackson, a firefighter with the Pinion Pine Fire District took the opportunity to photograph some of the lightning which left area fire departments busy most of the evening and portions of the community without power for a while.

Pinion Pine firefighters responded to a brush fires about 40 miles east of Kingman yesterday around 3 pm which was started by lightning. 1 engine and 1 chief officer responded to the area of mile marker 88 on Interstate 40 and located a small fire roughly 1/4 mile south of the freeway. Crews were able to contain the fire to a tenth of an acre.

As the weather moved west, lightning traveled through the Pinion Pine Fire District into the City of Kingman causing power outages in Kingman and the Blake Ranch area. The cell continued to move west into Golden Valley where lightning started two brush fires and is believed to have started an outbuilding fire and is being investigated by the Golden Valley Fire District.

Posted by Pinion Pine Fire District at 12:08 PM No comments:

On August 8, 2013 around 10:25 pm, Pinion Pine firefighters received an alarm for a reported vehicle fire on Interstate 40 eastbound near the 63 mile marker which brought the response of two engines and a Chief Officer. E511 was the first unit on scene to find a semi on the shoulder with heavy damage to the rear of the trailer and a second semi in the median with the cab fully involved. Crew deployed a CAFS attack line and suppressed the fire, keeping it from extending to the load in the trailer. The driver of the second vehicle was transported by ground to an area hospital with non life threatening injuries. The accident was caused when a tractor trailer struck the rear of another tractor trailer for an unknown reason, causing it to slide into the median where it later caught on fire. The incident is being investigated by the Department of Public Safety Highway Patrol. Due to the amount of debris on the roadway, traffic was reduced to the shoulder for approximately 3 hours. 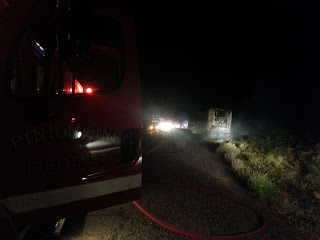 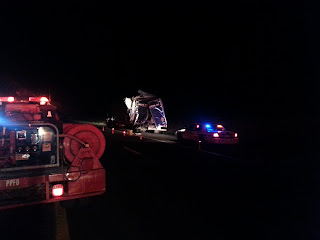